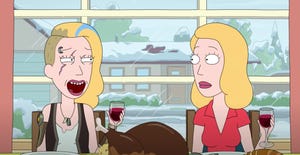 Warning: Spoilers ahead. Come back when you’ve binged episodes 1 to 6 of Rick and Morty, season 6.

I spoke with showrunner Scott Marder and the Rick and Morty cast during the season 6 hiatus, which ends with the release of episode 7 on Sunday on Adult Swim. They shared some details about the “real deal” Rick from the premiere; the much-discussed ending to episode 3, Bethic Twinstinct (sorry to those who scrutinized the final scene — it appears the Beths just partook in some plain old red wine); and why Rick didn’t get portal travel up and running again sooner.

“I think fixing it is probably something that was within his means, but it’s also something that Rick’s, like, ‘I’ll get to it tomorrow,'” Marder told me over Zoom last week on Rick’s inoperable portal travel gun. “So it made us laugh that Rick kind of kicked the can down the road to the point where [episode 6’s genius dinosaurs] were, like, ‘We can fix that.'”

The season premiere, Solaricks, found Rick and Morty stranded without a working portal gun after the events of the season 5 finale, which saw Evil Morty hack the gun. The device stays out of commission for several more episodes.

“We really wanted to make it feel like what Evil Morty did in [season 5, episode 10] wasn’t just like a quick and easy thing,” Marder said. “He’s like a fan favorite villain. So we wanted what he did to have major ramifications.”

Solaricks also included a character fans have come to know as integral to Rick’s past.

When Rick flubs an attempt to reset portal travel, he and Morty are transported back to their realities of origin. Morty subsequently learns he shares that dimension with the Rick who tragically murdered our Rick’s wife, Diane.

This character, who’s been referred to by people who make the show as Rick Prime, appears at first dancing naked (he could either be himself or a clone) and later wearing his signature purple-ish jacket (he talks about just having been naked). It’s anyone’s guess when the villain will show up next and what might happen when he does. Justin Roiland, who co-created the show with Dan Harmon, told me a bit about this “very intelligent” Rick… and I’m a bit worried for our Rick and Morty.

On a lighter note, Solaricks also brought Space Beth back into the fold, allowing for an episode that gave a whole new meaning to “self love.”

Rick previously cloned his adult daughter Beth, and Space Beth is either the original or the clone. In Bethic Twinstinct, Beth voice actress Sarah Chalke plays the dual versions of her character as they fall for each other.

“It was one of the more unique things that I’ve done in my career and in my career on Rick and Morty,” said Chalke, who’s also known for starring in the comedy series Scrubs.

Before their highly unconventional romance blossoms, the two Beths share some “Venusian” wine (from Venus, presumably). In the episode’s final scene — after Rick and his grandkids suffer though a meal while the adults get audibly frisky in another room — Rick wordlessly unlocks a hidden cabinet with a remote, shelves the wine and purges the remote down a garbage disposal.

Following Rick’s solo moment with the wine, some fans theorized the drink could have played a bigger role in what unfurled between the two Beths. (Did Rick know something we didn’t know about its contents? Venus is the Roman goddess of love and beauty, after all).

While Rick and Morty the show often takes the more complicated route, this scene was actually meant to be pretty straightforward, according to Marder.

“That was just supposed to be a silly joke,” Marder said. “I feel like the internet really took off with it.”

“There was nothing supernatural to it,” Marder said. “It was just what the two of them did to loosen up in the kitchen. I think Rick was just like, ‘Damn you wine,’ like, ‘You’ll get us into trouble time and time again.’ I think that was all it really was.”

Chalke’s Beths speak “Venusian” in the episode, but it’s actually just French. (Chalke spoke French in school from kindergarten to grade 12.) Marder said the show’s co-creator Dan Harmon suggested they re-name “French” late in the game, and at first, Marder thought he was going to need to whip up a language.

“[Harmon’s] like ‘No, you just call it Venusian,” Marder said. “It stays French.”

Another season 6 highlight is Night Family, an episode that sees the Smith family pass unwanted tasks off to their unconscious bodies while they sleep… with only a few minor consequences. In a twist, Rick’s granddaughter Summer, not Rick, is designated the leader of their terrifying “night” counterparts. Voice actress Spencer Grammer said she embraced the chance to “be really evil.”

“I’ve been wanting to do that for a while,” Grammer said.

There’s also Final DeSmithation, where Jerry (Rick’s son-in-law, Beth’s husband) becomes destined after reading a fortune cookie fortune to have sex with his mom. It sets off a hilarious Rick and Jerry adventure.

“I love the idea that you’re reading a fortune cookie, but … there’s some machinations behind the scene that actually cause you to have that fortune,” said Chris Parnell, who voices Jerry. “I thought, “Wow, they can justify anything. They can come up with a way to make sense of anything.”

According to Marder, the idea for that episode was an immediate yes.

Harmon, he said, “immediately put it on a Post-it, just slapped it on the board like ‘Episode!'”

A preview for the rest of season 6 teases what looks like a humanoid bug in a letter jacket, Morty engaged in a sword fight and Rick paying a visit to recurring character Dr. Wong, who’s voiced by Susan Sarandon. The intelligent therapist first appeared in the Emmy-winning season 3 episode Pickle Rick.

You should probably snag your pint of Gloppydrop-ice cream now, because Marder said the back half of the season is as stacked as the first.

“If you’re happy with what you’ve seen so far in season 6, I think we’ve got some really action-packed, crazy ones for the rest of the season,” Marder said. “One of the ones in these final four is like one of my absolute favorite episodes that the show’s done.”

New Rick and Morty episodes air on Sundays on Adult Swim. Rick and Morty’s sixth season is expected to eventually hit HBO Max and Hulu (for those without Hulu Plus Live TV, who have access).

Browser-Based VPNs: 3 to Try if You Want to Improve Online Privacy – CNET